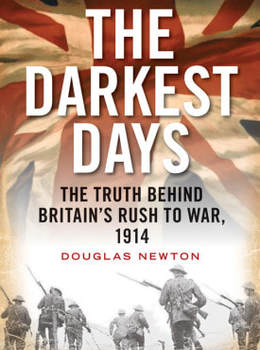 The Darkest Days provides a radical re-examination of the events surrounding Britain’s entry into the Great War.

The centenary of the outbreak of the First World War may be commemorated by some as a great moment of national history. But the standard history of Britain’s choice for war is far from the truth. Using a wide range of sources, including the personal papers of many of the key figures, some for the first time, historian Douglas Newton presents a new dramatic narrative. He interleaves the story of those pressing for a choice for war with the story of those resisting Britain’s descent into calamity. He shows how Britain’s decision to go to war was rushed, in the face of vehement opposition, in the Cabinet and parliament, in the Liberal and Labour press, and in the streets. There was no democratic decision for war.

The history of this opposition has been largely washed from the record, yet it was crucial to what actually happened in August 1914. Two days before the declaration of war four members of the Cabinet resigned in protest at the war party’s manipulation of the situation. The government almost disintegrated. Meanwhile large crowds gathered in Trafalgar Square to hear the case for neutrality and peace. Yet this cry was side-stepped by the government. At the same time, elements of the Conservative press, the Foreign Office, and the Tory Opposition sought to browbeat the government into a quick decision. Belgium had little to do with it.
The key decision to enter the war was made before Belgium was invaded. Those bellowing for war were eager for Britain to enter any war in solidarity with Russia and France – for the future safety of the British Empire. In particular Newton shows how Prime Minister H. H. Asquith, Foreign Minister Sir Edward Grey, and First Lord of the Admiralty Winston Churchill colluded to pre-empt the decisions of Cabinet, to manipulate the parliament, and to hurry the nation toward intervention by any means necessary.

Praise for “The Darkest Days”

“Should Britain have entered the war in 1914? This question has recently aroused controversy. As Douglas Newton shows, it was controversial in 1914, too. This book is a compellingly written, tightly argued, deeply researched and bracingly revisionist study of the decisions that led to British intervention. Newton uproots many hardy myths and reveals the deep divisions within the political elite of a country on the brink of war.”
– Professor Christopher Clark, author of The Sleepwalkers: How Europe Went to War in 1914.

​'... a forensic examination of Liberal party politics... His passionate engagement with the moral stakes of the July crisis has informed a profoundly challenging account of Britain's decision for war.'
- William Mulligan, Journal of Military History, 79, 4 (October 2015), 1150-1152.

‘There is a real danger that commemoration of the First World War will ignore the deep-seated eve-of-war divisions – both popular and at the highest levels of government – over whether or not Britain should be involved. Drawing on a command of sources built up over decades of scholarship, Douglas Newton tells a gripping story of high drama as fundamental decisions shift back and forth from day to day and even from hour to hour. These are also events about which we should say: “lest we forget”.’
– Robin Archer, London School of Economics

‘Both scholarly and accessible. This in-depth account of the British response to the assassination of Franz Ferdinand will open the eyes of many hitherto reluctant to face the facts.’
– Professor Keith Wilson, University of Leeds

“No reviewer can give full justice to the extraordinary thicket of research that this Australian historian undertook…. This overwhelming body of research is directed to one clear argument—to recover the reality behind the British decision to enter the Great War. Douglas Newton definitively undermines the official story…. Newton demonstrates with nuance and sensitivity that the days leading up to August 4, especially that previous week, were a time of apparent debate within the Liberal government…. Newton is not the only author, of course, to challenge the British decision to enter the war, but his presentation—on this centennial of the Great War—has set the standard. Only those who refuse to face the facts—or read the book—will remain fervent Churchillian defenders of the war declaration.”
– Professor Sandi Cooper, Peace & Change

Full Synopsis
The Darkest Days tells the story of the decision for war in Britain in 1914 in a new way.

It aims to interleave two stories, the story of the forces urging a choice for war and the story of the forces resisting that choice. It traces the contest between ‘interventionists’ and ‘neutralists’ (or ‘Radicals’), inside the Cabinet of Liberal Prime Minister H. H. Asquith, and the contest for public opinion beyond it, in the last days of peace.

The book opens by highlighting a neglected event on the war’s eve: the resignations of four Cabinet ministers on Sunday 2 and Monday 3 August in protest at the pledge of naval aid to France on Sunday. The Cabinet crisis indicates how fiercely contested was Britain’s decision for war. Nowhere else in Europe did this happen.

The book then explores the British response to the Balkan crisis from late July. It shows how Britain sent mixed signals from the outset. Foreign Secretary Edward Grey proposed a Conference of Ambassadors in London. The Cabinet endorsed a stance of ‘apparent indecision’ about any intervention in war – to keep both sides guessing. This stance was compromised by two provocative moves: Churchill’s order to theFleets on Sunday 26 July not to disperse after a test mobilization, and his order to the First Fleet on Tuesday 28 July to move to war stations. Both moves encouraged hardliners in Russia and France to expect British support. The Cabinet’s neutralists fought back. On Wednesday 29 July Cabinet rejected a proposal that any violation of Belgian territory should trigger war. But the neutralists failed to prevent Cabinet’s decision to send the ‘Warning Telegram’ across the Empire, cranking up war preparation. Then, on Thursday 30 July, Grey and Asquith angrily dismissed German attempts to begin negotiations with Britain on her neutrality – before the Cabinet had even heard of the approach. During the week, Foreign Office leaders, diplomats and military advisers pressed hard for a show of solidarity with Russia and France.

By this time, Britain’s newspapers were locked in a battle for public opinion. Conservative newspapers clamoured for solidarity. The Radical and Labour press campaigned for an active neutral diplomacy. Meanwhile, Grey misled and muzzled neutralists with promises that Britain was keeping a ‘free hand’ and was mediating as a neutral – far from the truth. Fear of abandonment by the Entente, and fear for the safety of the British Empire, drove the Cabinet’s interventionists to insist on early military moves to advertise Britain’s absolute loyalty to the Entente powers.

News of Russia’s general mobilization reached London on Friday 31 July. It jolted Asquith into a late gesture to restrain Russia: he urged George V to cable Nicholas II pleading for negotiation. The weekend of Saturday 1 and Sunday 2 August proved critical. Leading Conservatives, diplomats, journalists and military officers waged a self-styled ‘pogrom’, orchestrating pressure for war. The Tory leaders sent letters and promised Asquith their support for war. But the neutralists in the Cabinet held firm. On Saturday they gained a key decision: against the sending of the British Expeditionary Force (BEF) to Europe. Big demonstrations in London and other cities urged neutrality on Sunday 2 August. But on the same day the Cabinet changed tack. In the face of threats to resign from Asquith, Grey and Churchill, the Cabinet authorised a pledge of naval support to France. This sealed a choice for Britain’s war, if war erupted. Spectacularly, four ministers walked. But this was kept hidden.

The leaders then contrived the pretence of a parliamentary decision for war. On Monday 3 August Grey addressed the Commons, abandoning Britain’s supposed ‘free hand’. He revealed naval arrangements with France from 1912, creating a moral obligation. He stressed the strategic importance of Belgium. He urged swift British intervention in any war. He hinted it would be a cheap naval war, and that the BEF would not be sent. Most of the Liberal press and party were not persuaded. The backbench Radicals protested. That evening, sixteen MPs spoke against intervention.

The sprint into disaster came at a hectic pace on Tuesday 4 August. The disastrous German invasion of Belgium provided political cover for a war of Entente solidarity. A handful of Cabinet ministers took the final decision in the evening to declare war. A Privy Council of just four men endorsed it. On Thursday 6 August, the government released a ‘White Paper’ of 159 diplomatic documents – a very dodgy dossier – airbrushing out Russia’s role. Effectively ‘bounced’, the Commons supported war.
​
But neutralists shared bitter recriminations over these events. The Cabinet had been ‘jockeyed’. Hasty military steps had pre-empted its choices. Grey had used the redistribution of the British and French fleets to blackmail the parliament. The public had been stampeded. The war for Belgium was a shiny half-truth. Germany’s blunder in Belgium on 4 August could not vindicate all British actions before that date. Credible British neutral diplomacy might have helped avert war. Instead, Britain’s haste had contributed to the common European tragedy of a sudden descent into war. .