Private Ryan and the Lost Peace 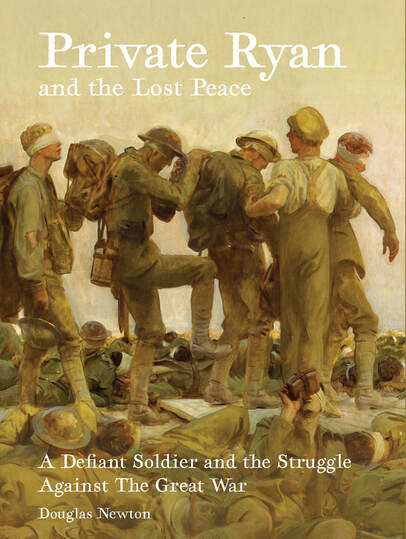 Imagine the Great War ending early, in 1915, or 1916, or even 1917. Imagine round-table negotiations and a compromise peace, ending what seemed to be an unbreakable military stalemate. Had peace come in this way, perhaps there would have been no Communism, no Fascism, no Nazism, no Great Depression, and no Second World War. During the Great War, many urged such a peace.

Private Ryan and the Lost Peace is the story of one soldier who rebelled against the war and urged a mediated settlement. He happened to be Australian, but his could be the story of many an ‘everyman’ at the front. Private Ted Ryan, originally from Broken Hill, sent an angry letter to Britain’s famous anti-war politician, Ramsay MacDonald, urging him to keep pushing for peace. Ryan denounced the war as the herding of men to a hideous ‘abattoir’ of industrialised killing! He blasted talk of fighting on to ‘the knock-out blow’. Eventually, Ryan’s revolt landed him in four courts martial. He even received a death sentence. Were secret diplomatic deals prolonging the war? Were promising opportunities for peace callously rebuffed? From what we know now about the squashing of peace initiatives, Ted Ryan’s instincts were dead right. The Great War was a protracted catastrophe, unnecessarily prolonged. Those who rebelled against it – even in the trenches – deserve to have their story heard.

Advance Praise for "Private Ryan and the Lost Peace"

“Two interwoven and shocking narratives of World War I — one explores the acquisitive war aims of the Allied Powers that made peace impossible; the other, the soldier from Broken Hill who, realising this, chose to protest and even to endure prison rather than fight.”
- Joan Beaumont, Professor Emerita, Australian National University, author of Broken Nation: Australians in the Great War (2013):

“In this remarkable history, Douglas Newton reveals that one Australian working-class soldier’s rebellion against the First World War was joined to the revolt of millions across the world against the slaughter and in favour of peace. Private Ryan’s fascinating story is a reminder that the ‘big’ politics of strategy, diplomacy and treaties makes little sense if we lose sight of the ordinary people whose lives are the currency in the amoral haggling of their rulers. A profoundly moving and timely reflection on one war and all war.”
Frank Bongiorno, Professor of History, The Australian National University, author of The Eighties (2015)

“A compelling counterfactual to the Anzac narrative of Australia and the Great War that narrates the courageous dissent of Private Ted Ryan against the war machine in which he was a cog, upon a stage of opaque international diplomacy that unnecessarily prolonged the industrialised slaughter.”
- Paul Daley, historian and journalist at The Guardian, author of Beersheba (2017)

“I found this a most compelling narrative, exquisitely written – an account everyone should read of a courageous, passionate, defiant lad from Broken Hill, who takes on the very top of the wartime establishment when its brutal suppression of peace initiatives drives him to a breathtaking act of rebellion.”
- Justin Fleming, eminent Australian playwright and librettist

“An arresting story about an Australian boy who believed that just because he became a Digger, it did not mean he gave up the high office of being a free citizen. I hope the spirit and ethos of Private Ryan still resonates in modern Australia, for no one believed in the dignity of the individual more passionately than he.”
- Thomas Keneally, eminent Australian novelist and historian, author of Australians: Eureka to the Diggers (2011)

“Beautifully written by an eminent Australian historian, this comprehensive account of one man’s desire for peace and an end to war
will resonate with readers seeking an insight into the minds of Australia’s soldiers.  Court-martialled four times, once sentenced to death, Ted Ryan, from Broken Hill, showed great courage in holding to his beliefs. Douglas Newton asks what is courage in war?”
- Michael McKernan, Australian historian, author of When This Thing Happened (2015)

“Prodigiously researched, written with verve and fervour, this is an illuminating and compelling successor to his brilliant Hell-bent: Australia’s Leap into the Great War (2014).”
- Ross McMullin, Australian historian, author of Farewell, Dear People (2012)

“Private Ryan and the Lost Peace is an engaging and challenging addition to Australian literature about the First World War. Newton
skilfully weaves together the story of Ted Ryan’s war and the great forces that determined the course of the conflict. But above all this is a book which challenges what he calls the ‘fixed gaze that has been offered to the Australian people’ during the recent carnival of commemoration. It is essential reading for anyone wishing to broaden their understanding of the great catastrophe with ‘the nationalist blinkers’ removed.”
- Henry Reynolds, Honorary Research Professor at the University of Tasmania, author of Unnecessary Wars (2016)

“Douglas Newton offers a vigorous and vivid corrective to the nationalist boasting of the Anzac legend – but also an inspiring story of a hitherto unknown Australian soldier of the Great War who bravely stood up against the mindless militarism which condemned him and millions like him to a hellish war. This is an Anzac story of a different kind, one that needs to be told and known.”
- Peter Stanley, Research Professor, UNSW Canberra, author of Bad Characters: Sex, Crime, Mutiny, Murder and the AIF (2010: