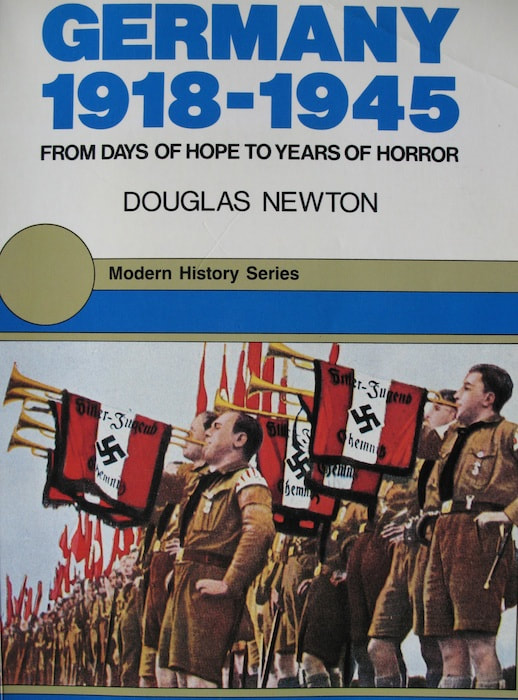 Germany 1918-1945 provides a narrative overview of German history from the Revolution of 1918-1919 to 1945. It includes chapters on the Weimar Republic, the foundation of the Nazi Party, the achievements and difficulties of Weimar, the Nazi takeover in 1933, economic and social life under the Nazis, Nazi foreign policy, the origins of the Second World War, the “Home Front” and the Nazi “New Order”, and the final collapse of the Nazi Third Reich in 1945.The book is lavishly illustrated throughout with rare historic photographs and includes many useful maps. Each chapter features a timeline, a dramatic narrative, selected documents from primary sources, suggested essay questions, discussion starters, a debating topic, a suggestion for a dramatic re-enactment of an historic event, a guide to further reading, and glossary notes on difficult words.

The book includes special sections on the skills of the historian, including investigating and researching, processing and recording, evaluation, and the essential skills of written communication. There are two picture essays, one on “The Invasion of the Ruhr in 1923, and the Crisis of 1923”, and another on “The Hitler Youth and Posters and Artwork of the Crisis Years”.

​– Dr A. B. Gaunson, Head of History, Sydney Grammar School, June 1995: “Douglas Newton has written a clear and accessible book which must rank as one of the most thorough modern history texts of recent times. This thoroughness extends beyond its very sound text, for Newton also offers a stage-by-stage feature on skills, informative glossaries after each chapter, and a superb collection of illustrations. There is even a concise introduction to the whole ‘problem’ of modern German History. HSC Candidates who want to do well should find this book indispensable.”