British Labour, European Socialism and the Struggle for Peace 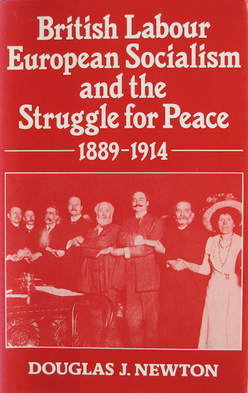 The twenty-five years before the outbreak of the First World War saw a major effort in the Second International to express the ideal of international working-class solidarity in the face of a growing mood of aggressive nationalism in most European nations. The spectacular hopes that war might thus be made impossible were crushed in 1914, when the Second International virtually collapsed. In the controversy at the time and since over its failure to enforce the peace,most attention has been focused on the Second International itself or the French and German socialist parties; this new study is the first to examine fully the British labour movements’s contribution to the campaigns against militarism and war.

The books is based on a wide range of sources, and is among the first to draw on substantial material from local trade councils to depict the responses of rank-and-file trade unionists. The book considers the evolution of opinion on defence and foreign policy in British labour and socialist circles, and examines the difficulties faced in the peace campaign: the tensions between socialist and the more traditionally patriotic assumptions of trade unionists; divisions over the proper response to the ‘German menace’ and naval rearmament; and the lack of genuinely friendly relations with the German socialists. There is also a major re-evaluation of Keir Hardie’s campaign for a general anti-war strike.

The study is, inevitably, a study in failure. But nevertheless much of the late Victorian and Edwardian socialists’ criticisms of imperialism, militarism, aggressive patriotism, and ‘entangling alliances’ was, in the long run, to prove far-sighted and influential; and the campaigns waged in this period served to implant characteristic responses to these issues in the British labour movement which are once again of the first importance in the debate over disarmament today.
​
Praise for “British Labour, European Socialism and the Struggle for Peace”