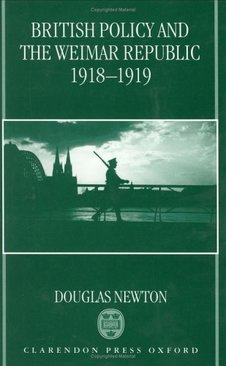 British Policy and the Weimar Republic explores the making of British policy toward Germany in the aftermath of its defeat in the Great War. Douglas Newton shows how British pressures on Germany during the formative months of the new republic were crucial in debilitating the German Revolution and the faltering Weimar democracy. Using a vast array of private papers, Dr Newton reveals the inner workings of British policy-making: the long-standing reluctance to make any commitment to German democratization; the overwhelmingly hostile response to the socialist-led German Revolution; the shunning and starvation of the new socialist government; the support for the resuscitation of a degree of militarism to deal with ‘Bolshevism’ inside Germany; and the battle to achieve the only real concession made to Germany – the minor relaxation of the economic blockade, in March 1919, to allow emergency food relief.
​
British policy towards the ‘new Germany’ was forged in an atmosphere of great tension. British ‘moderates’, especially strong in the intelligence services, recommended policies of reconciliation to strengthen the emergence of German democracy. These ‘moderates’ faced powerful ultra-patriotic and economic pressure groups, supported by the popular press, who had long insisted upon a policy of aggrandizement for Britain and her Empire at Germany’s expense at the war’s end, in order to smother anticipated unrest in post-war Britain. Britain’s decision-makers vacillated for months as different factions and advisers struggled for supremacy at the heart of the government. With many misgivings, Britain’s leaders eventually opted to impose a ‘harsh’ treaty on the Weimar Republic, in spite of an emerging consensus among the intelligence ‘experts’ in favour of a moderate peace to consolidate Germany’s transition to democracy. Douglas Newton shows how domestic political priorities triumphed over expert opinion, with ominous consequences for the fate of German democracy and for the rest of Europe.

– John McDermott, International History Review: ‘a sometimes brilliant achievement marked by emotion lacking in most accounts.’
– Michael Dockrill, King’s College London, in English Historical Review: ‘has broken new ground… an important contribution to our knowledge.’
– John Turner, Royal Holloway College, in Albion: ‘an original and discursive study … a convincing account, based on a wide range of sources… an excellent study of policymaking.’
– Stefan Berger, in German History: ‘Based on a truly staggering wealth of archival research (especially private papers of leading British politicians)… Newton has written an extremely valuable and depressingly revealing study.’
– Kenneth Calkins, in Journal of Modern History: ‘He makes effective use of numerous quotations from diaries, correspondence, and memoirs as well as the contemporary press. ….The author presents much that is new.’