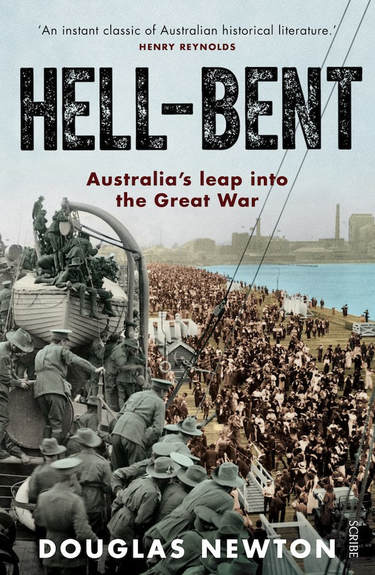 Hell-Bent offers a critical history of Australia’srole during the international crisis of July-August 1914. It is the first to interleave a close study of events in Australia and Britain during the last days and hours of peace. At the climax of the story is the decision of the Cabinet of Australian Liberal Prime Minister Joseph Cook to cable London on Monday 3 August, offering an expeditionary force and the transfer of the Australian navy – almost forty hours before Britain’s declaration of war. That Australia would fight on Britain’s side in a great war was certain. But Australia’s leap into war, through her offer of 3 August, was impetuous, and scarcely a democratic decision. A handful of men pushed ahead of events.

Meanwhile in London, at the height of the crisis, the British Cabinet of Liberal Prime Minister Herbert Asquith was bitterly divided on the question of British intervention in any European war. On one side stood Liberal Imperialists, keen to act loyally with Britain’s diplomatic partners, Russia and France. On the other stood Radicals, anxious that Britain should pursue a credible neutral diplomacy and preserve the neutrality of Britain and the Empire if it came to war on the Continent. The decision hung in the balance. At a critical hour, Australia’s politicians gave the impression of being eager to fight – champing at the bit to contribute to any war.

Australia’s decisions were made in the din of politics. The nation was in the throes of a federal election campaign. The offer of an expeditionary force on Monday 3 August far exceeded the measures agreed between Australia and Britain as necessary. The bitter truth – that Australia’s rushed offer of an expeditionary force added to the momentum of reactionaries pressing for war in London – is scarcely recognised in Australia. Moreover, the offer was a dangerous precedent. Australia’s politicians forfeited the chance to weigh objectives against costs, in life and treasure. Australians were hell-bent – and they got there.

Douglas Newton’s Hell-Bent: Australia’s Leap Into the Great War (Scribe) reminds one, for its power to fascinate, of Barbara Tuchman’s The Guns of August (Penguin) and is a fascinating antidote for the ‘1914 rabies’ politicians are trying to infect us with.’
Thomas Kenneally, Sydney Morning Herald, 6-7 December 2014.

‘A wonderful book…indeed an instant classic of Australian historical literature. Stands out in the flood of titles about our national history of warfare. The indispensable text about Australia’s tragic involvement in Great War.’
Professor Henry Reynolds, ARC Senior Research Fellow, University of Tasmania.

‘An original and disturbing account of the role of imperial manipulation and the connivance of Australian political leaders in the nation’s premature leap into war. In a crowded historical field, Douglas Newton’s attention to the political dimensions of Australia’s (and Britain’s) military commitment stands out. Meticulously researched and engagingly written, Hell-Bent highlights the dire logic of Australia’s condition as a self-governing colonial dependency and the profound cost of the burden of empire.’
Marilyn Lake, Professor in History and ARC Professorial Fellow at the University of Melbourne, President of the Australian Historical Association

‘Douglas Newton’s Hell-bent is by far the best ever account of Australia’s participation in the world’s catastrophic plunge into war in 1914. The product of meticulous research, Newton’s book superbly captures the drama, brinksmanship, naivety and tragedy of those times, reminding us of citizens’ vulnerability – then and now – to political manipulation and deception in matters of war and peace.’
Frank Bongiorno, Associate Professor of History at the Australian National University and co-editor of History Australia, the Australian Historical Association’s journal.

‘[Newton] gives by far the best account I know of how Australia’s decision for war was actually made day by day in July and August 1914. I very strongly recommend it.’
Professor Hugh White, in Annual Hawke Lecture, August 2014: From the Great War to the Asian Century: What we can learn from 1914 about our place in the world.

‘This is a fascinating look at a complex time, shining a light into all sorts of dark corners, easy to read, and important addition to Australian history.’
Nick Goldie, Cooma-Monaro Express

‘This is an engaging and thought-provoking book and a welcome addition to the ever expanding library of WWI books, many of which focus instead on entrenching further the already well-advanced heroic Anzac mythology.’
Peter Masters, Australian Defence Magazine, February 2015.

“…an excellent book. Hell-bent is a very readable work of scholarship. Based on impeccable research, it provides an interpretation of events that challenges the received perception, and will be read with much interest by anyone interested in the role of Australia, and New Zealand, in the first great war of the twentieth century. It is a strong antidote to the celebratory tone of much of the centenary commemoration discourse on both sides of the Tasman.”
Ian McGibbon, New Zealand International Review, Vol. 40, No. 3 (May/June 2015), pp. 30-31

Hell-Bent is the first book to interleave a close study of events in Australia and Britain. At the climax of the story is the decision of the Cabinet of Australian Liberal Prime Minister Joseph Cook to cable London on Monday 3 August, at 6 p.m. (AEST) or 8 a.m. (GMT) – almost forty hours beforeBritain announced her own declaration of war – offering Australia’s entire navy and an expeditionary force of 20,000 troops, to any destination, at the complete disposal of London, and at Australia’s expense. This offer was precipitate, premature and unqualified. Of course, that Australia would fight on Britain’s side in a great European war was certain. Constitutionally, politically, and emotionally, it was impossible for Australia to assert its neutrality. But Australia’s plunge into war was impulsive, reckless, and scarcely democratic. There was no public pressure for this.

Theoretically, Australia held the right to decide what aid to offer Britain in any conflict. But in practice, during the decade before 1914, Australian politicians had abandoned the idea that Australia might stand at arm’s length in an imperial war and offer only minimal assistance. Thus, with political support, Australian military officers began planning an expeditionary force to serve overseas from late 1912.

During the July 1914 crisis, the British Cabinet of Liberal Prime Minister H. H. Asquith was bitterly divided. On one side stood interventionists, keen to assist France and Russia in war. On the other stood neutralists, anxious that Britain should pursue neutral diplomacy. Both sides gained victories in Cabinet. The interventionists secured a decision to send a ‘Warning Telegram’ to the Empire on Wednesday 29 July. The neutralists prevailed on Saturday 1 August when Cabinet decided against sending a British Expeditionary Force into war. Most importantly, the interventionists secured the fateful promise of naval assistance to France on Sunday 2 August. This prompted four resignations. Britain’s decision hung in the balance. Over the same weekend, New Zealand and Canada sent offers of expeditionary forces. This provoked competitive Australian imperial enthusiasts to press for a matching offer.

Early in the crisis, Australian naval officers and the governor-general, Munro Ferguson, urged the politicians to authorise military preparations. On Thursday 30 July, Munro Ferguson secured a promise to transfer the RAN fleet to the British Admiralty – before the British requested it. Similarly, Australian ships began their move to war stations – before the British requested it. Australia was in the middle of a federal election campaign. At rallies on Friday 31 July, both the Liberal leader Cook and the ALP leader Fisher promised Britain unlimited assistance. Military decisions were made in the din of politics. Over the weekend of 1-2 August, the same Liberal politicians who ordered the first steps in Australia’s mobilisation spoke at political rallies. Seeking political advantage, they alleged that an ALP government would neglect defence. Spooked, the ALP leaders pledged support for all Cook’s defensive measures. They made no plea for caution, and sidelined the ALP at a critical hour.
​
On Friday 31 July Munro Ferguson pressed for an emergency Cabinet. On Monday 3 August, the Cook Cabinet met in Melbourne, attended by only four of ten ministers. It leapt ahead, deciding to offer Britain an expeditionary force. This went well beyond the ‘precautionary stage’ as outlined in Australia’s ‘Defence Scheme’. In London, Lewis Harcourt, Colonial Secretary and leading Cabinet neutralist, was embarrassed. There was ‘no immediate necessity’ for expeditionary forces, he cabled. However, the Northcliffe press and prominent Tories seized upon the Dominions’ offers to whip up support for British intervention. Then German forces invaded Belgium on the morning of Tuesday 4 August. This provided political cover for the earlier choice for a war of Entente solidarity, with France and Russia. A rump of the British Cabinet finally decided upon war late on Tuesday evening. A tiny Privy Council endorsed it.
Australia’s offer of an expeditionary force is praised in nationalist histories as democratic audacity in action. In fact, it was imitative, rash and driven by low politics. Of course, the German invasion of Belgium on Tuesday 4 August was an appalling blunder, but that scarcely justifies all British or Australian action. Britain had offered France a pledge of naval support on Sunday 2 August – and the Cabinet had tottered. Then Australia made its offer of forces on Monday 3 August. The bitter truth – that Australia’s rushed offer added to the momentum of reactionaries in Britain pressing for war, irrespective of Belgium – is scarcely recognised. Moreover, it was a dangerous precedent. Australia presented itself as desperate to fight. Thus, Australia’s politicians forfeited the chance to weigh up costs, to assess objectives, or insist upon consultation. Not surprisingly they soon found they exerted no real influence over the Empire’s high diplomacy. They did nothing to restrain the enlargement of Britain’s war aims, which prolonged the war. We were hell-bent – and we got there.